Design and Architecture of Nebula Graph¶

This document is to walk you through on how Nebula Graph is designed and why, and it will be separated into two parts: Industry Overview and Nebula Graph Architecture. 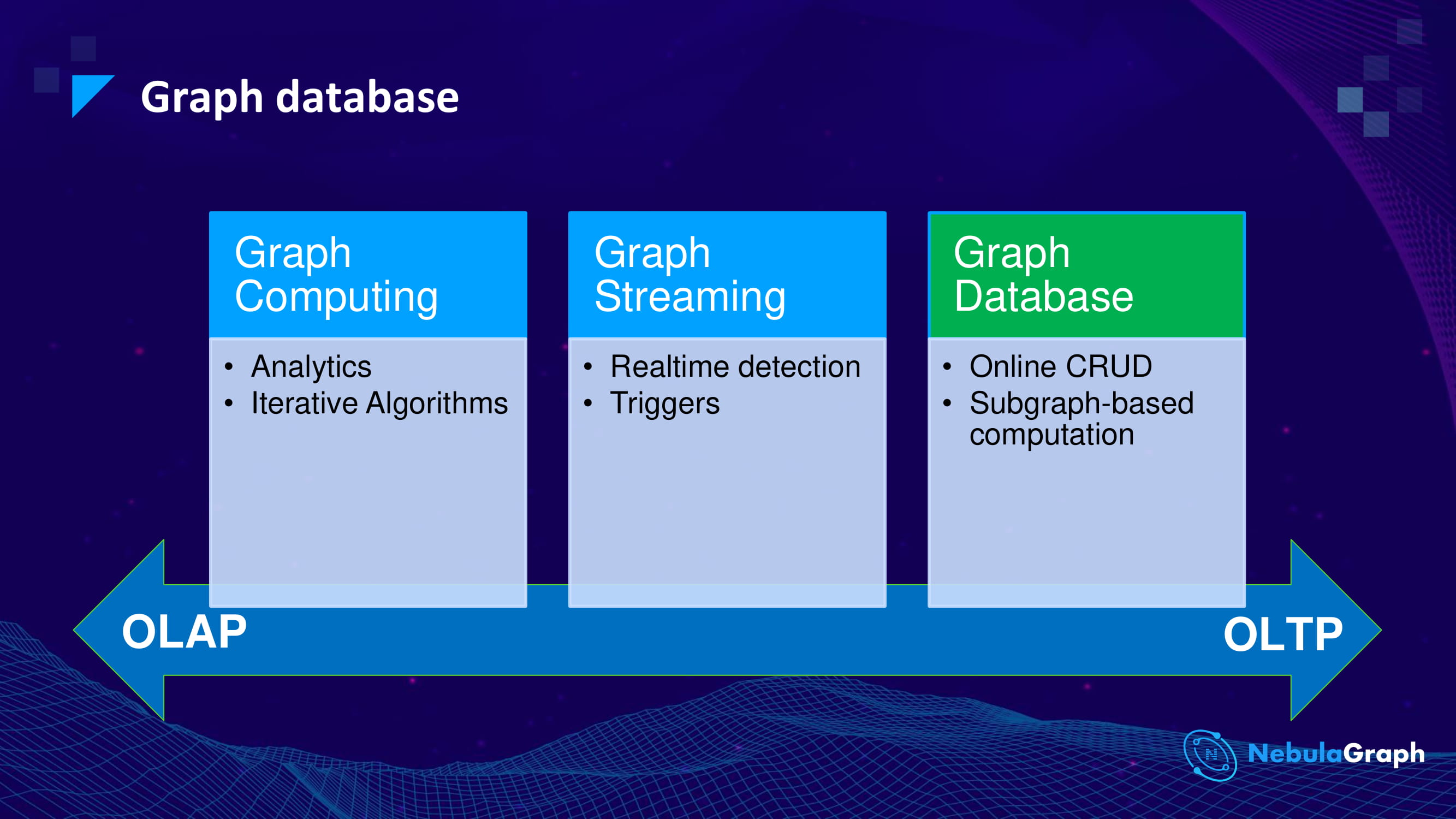 The axis in the above picture shows the different requirements for query latency. Like a traditional database, graph database can be divided into two parts: OLAP and OLTP. OLAP cares more about offline analysis while OLTP prefers online processing. Graph computing framework in OLAP is used to analyse data based on graph structure. And it's similar to OLAP in traditional database. But it has features which are not available in traditional database, one is iterative algorithm based on graph. A typical example is the PageRank algorithm from Google, which obtains the relevance of web pages through constant iterative computing. Another example is the commonly-used LPA algorithm.

Along the axis to right, there comes the graph streaming field, which is the combination of basic computing and streaming computing. A relational network is not a static structure, rather, it constantly changes in the business: be it graph structure or graph properties. Computing in this filed is often triggered by events and its latency is in second.

Right beside the graph streaming is the online response system, whose requirement for latency is extremely high, which should be in millisecond.

The rightmost field is graph database and its use cases are completely different from the one on the left. The Nebula Graph we're working on can find its usage here in OLTP.

Graph databases can be classified into two kinds: native graph database and multi-model graph database. Using a graph first design, native graph databases are specifically optimized in storage and processing, thus they tend to perform queries faster, scale bigger and run more efficiently, calling for much less hardware at the same time. As for multi-model products, their storage comes from an outside source, such as a relational, columnar, or other NoSQL database. These databases use other algorithms to store data about vertices and edges and can lead to latent results as their storage layer is not optimized for graphs.

In graph database, data is stored as graph. Modelling data as graph is natural, and has the nice benefit of staying legible even by non-technical people. The data model handled by Nebula Graph is directed property graph, whose edges are directional and there could be properties on both edges and vertices. It can be represented as:

Designed based on the above features, Nebula Graph is an open source, distributed, lightning-fast graph database, it is composed of four components: storage service, meta service, query engine and client. 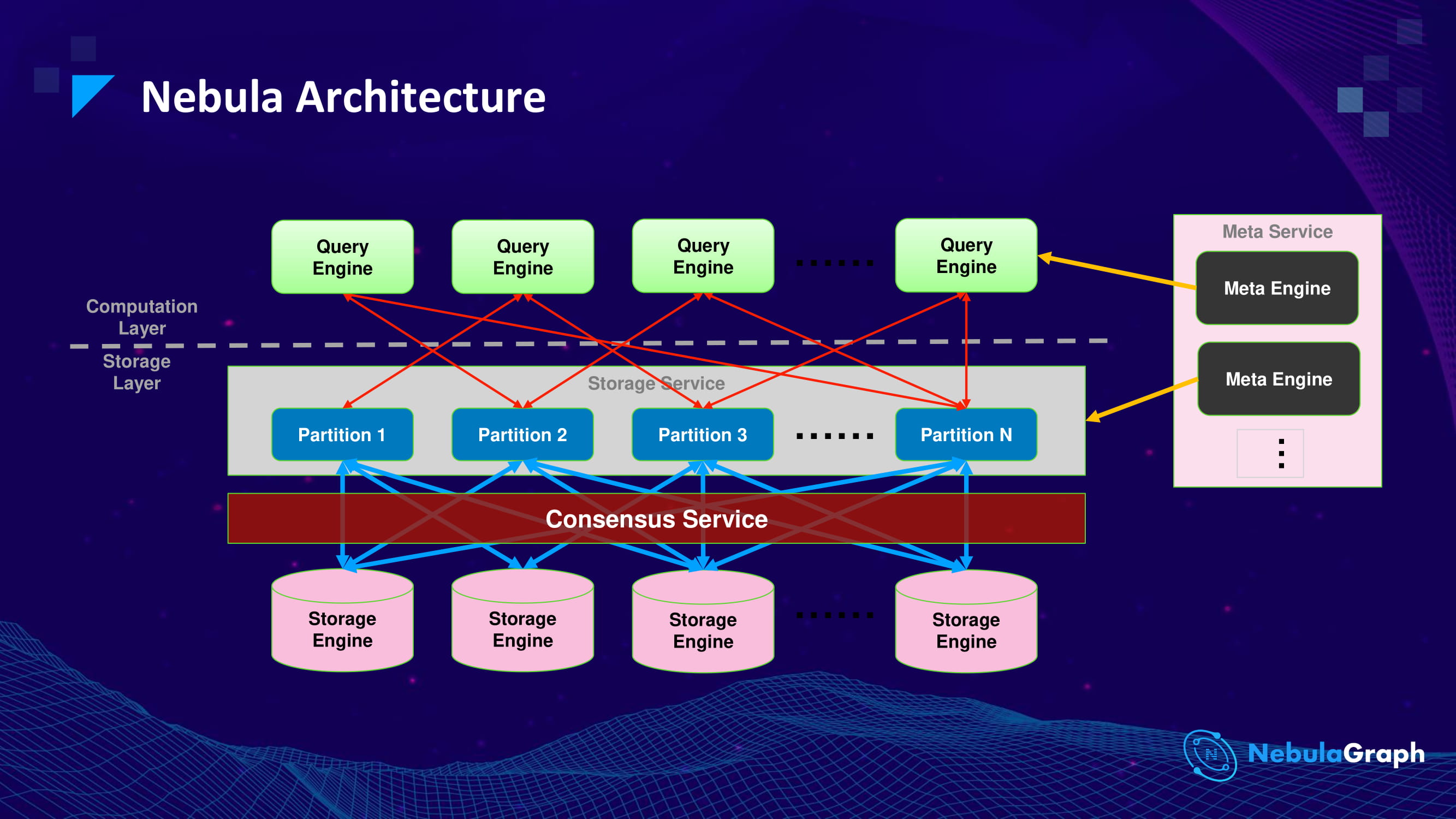 The dashed line in the above picture divided computing and storage as two independent parts, the upper is the computing service, each machine or virtual machine is stateless and never talks to other so it's easy to scale in or out; the lower is the storage service, it's stateful since data is stored there. Storage service can turn graph semantics into key-values and pass them to the KV-store below it. Between the two is the Raft protocol.

The right side is the meta service, similar to the NameNode in HDFS, it stores all metadata like schema and controls scaling.

Nebula Graph adopted the shared-nothing distributed architecture in storage so nodes do not share memory or storage, which means there are no central nodes in the whole system. Benefits of such design are:

Another design is the separation of computing and storage, and the benefits are as follows:

The binary of storage service is nebula-storaged, which provides a key-value store. Multiple storage engines like RocksDB and HBase are supported, with RocksDB set as the default engine. To build a resilient distributed system, Raft is implemented as the consensus algorithm.

Raft achieves data consensus via an elected leader. Based on that, nebula-storaged makes the following optimizations:

Partitions of the same ID from multiple machines form a raft group. And the parallel operations are implemented with multiple sets of Raft groups.

In Raft protocol, the master replicates log entries to all the followers and commits the entries in order. To improve the write throughput, Nebula Graph not only employs the parallel raft, but also implements the dynamic batch replication.

Migrating the partitions on an overworked server to other relatively idle servers to increases availability and capacity of the system.

The binary of the meta service is nebula-metad. Here is the list of its primary functionalities:

Nebula Graph's query language nGQL is a SQL-like descriptive language rather than an imperative one. It's compossible but not embeddable, it uses Shell pipe as an alternative, aka output in the former query acts as the input in the latter one. Key features of nGQL are as follows:

The primary optimizations of the query engine are:

Nebula Graph provides SDKs in C++, Java, and Golang. Nebula Graph uses fbthrift as the RPC framework to communicate among servers. Nebula Graph's web console is in progress and will be released soon.