People from tech giants (such as Amazon and Facebook) to small research teams are devoting significant resources to exploring the potential of graph databases to solve data relationships problems. What exactly is a graph database? What can it do? Where does it fit in the database landscape? To answer these questions, we first need to understand graphs.

Graphs are one of the main areas of research in computer science. Graphs can efficiently solve many of the problems that exist today. This topic will start with graphs to explain the advantages of graph databases and their great potential in modern application development, and then describe the differences between distributed graph databases and several other types of databases.

Graphs are everywhere. When hearing the word graph, many people think of bar charts or line charts, because sometimes we call them graphs, which show the connections between two or more data systems. The simplest example is the following picture, which shows the number of Nebula Graph GitHub repository stars over time.

This type of diagram is often called a line chart. As you can see, the number of starts rises over time. A line chart can show data changes over time (depending on the scale settings). Here we have given only examples of line charts. There are various graphs, such as pie charts, bar charts, etc.

Another kind of diagram is often used in daily conversation, such as image recognition, retouched photos. This type of diagram is called a picture/photo/image.

The diagram we discuss in this topic is a different concept, the graph in graph theory.

In graph theory, a branch of mathematics, graphs are used to represent the relationships between entities. A graph consists of several small dots (called vertices or nodes) and lines or curves (called edges) that connect these dots. The term graph was proposed by Sylvester in 1878.

The following picture is what this topic calls a graph.

Simply put, graph theory is the study of graphs. Graph theory began in the early 18th century with the problem of the Seven Bridges of Königsberg. Königsberg was then a Prussian city (now part of Russia, renamed Kaliningrad). The river Preger crossed Königsberg and not only divided Königsberg into two parts, but also formed two small islands in the middle of the river. This divided the city into four areas, each connected by seven bridges. There was a game associated with Königsberg at the time, namely how to cross each bridge only once and navigate the entire four areas of the city. A simplified view of the seven bridges is shown below. Try to find the answer to this game if you are interested 1. 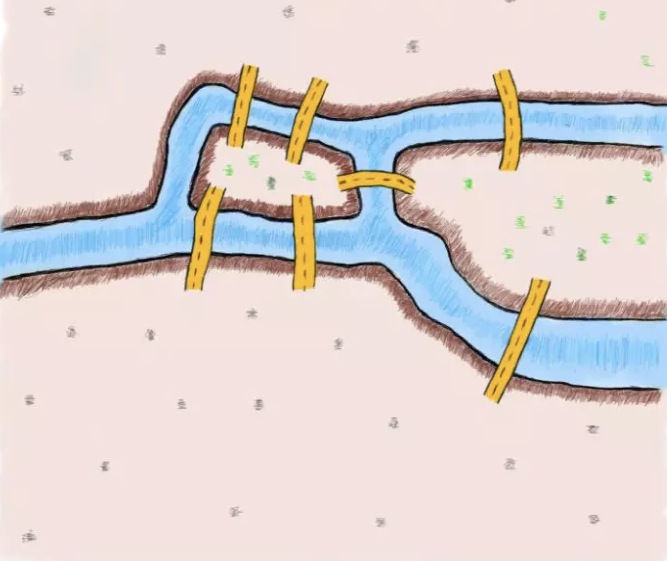 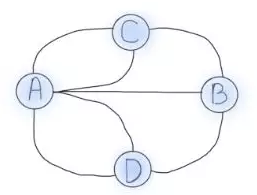 The four dots in the picture represent the four regions of Königsberg, and the lines between the dots represent the seven bridges connecting the four regions. It is easy to see that the area connected by the even-numbered bridges can be easily passed because different routes can be chosen to come and go. The areas connected by the odd-numbered bridges can only be used as starting or endings points because the same route can only be taken once. The number of edges associated with a node is called the node degree. Now it can be shown that the Königsberg problem can only be solved if two nodes have odd degrees and the other nodes have even degrees, i.e., two regions must have an even number of bridges and the remaining regions have an odd number of bridges. However, as we know from the above picture, there is no even number of bridges in any region of Königsberg, so this puzzle is unsolvable.

From a mathematical point of view, graph theory studies the relationships between modeled objects. However, it is common to extend the underlying graph model. The extended graphs are called the attribute graph model. A property graph usually consists of the following components.

In real life, there are many examples of property graphs.

For example, Qichacha or BOSS Zhipin use graphs to model business equity relationships. A vertex is usually a natural person or a business, and the edge is the equity relationship between a person and a business. The properties on vertices can be the name, age, ID number, etc. of the natural person. The properties on edges can be the investment amount, investment time, position such as director and supervisor. Graphs can also be used to improve the efficiency of code development. Graphs store function call relationships between codes 6 to improve the efficiency of reviewing and testing the code. In such a graph, each vertex is a function or variable, each edge is a call relationship between functions or variables. When there is a new code commit, one can more easily see other interfaces that may be affected, which helps testers better assess potential go-live risks.

In addition, we can discover more scenarios by adding some temporal information as opposed to a static property graph that does not change.

For example, inside a network of interbank account fund flows 7, a vertex is an account, an edge is the transfer record between accounts. Edge properties record the time, amount, etc. of the transfer. Companies can use graph technology to easily explore the graph to discover obvious misappropriation of funds, paying back a load to with the loan, loan gang scams, and other phenomena.

The same approach can be used to explore the discovery of the flow of cryptocurrencies. These graph data records the characteristic of the network black production operations. Some big companies such as 360 DigiTech8, Kuaishou9, WeChat10, Zhihu11, and Ctrip Finance all identified over a million crime groups through technology. In addition to the dimension of time, you can find more scenarios for property graphs by adding some geographic location information. The combination of geographic location and graph is also used in some O2O scenarios, such as real-time food recommendation based on POI (Point-of-Interest) 13, which enables local life service platform companies like Meituan to recommend more suitable businesses in real-time when consumers open the APP.

A graph is also used for knowledge inference. Huawei, Vivo, OPPO, WeChat, Meituan, and other companies use graphs for the representation of the underlying knowledge relationships.

Why do we use graph databases?¶

Although relational databases and semi-structured databases such as XML/JSON can be used to describe a graph-structured data model, a graph (database) not only describes the graph structure and stores data itself but also focuses on handling the associative relationships between the data. Specifically, graph databases have several advantages:

This topic does not discuss the RDF data model due to space limitations.